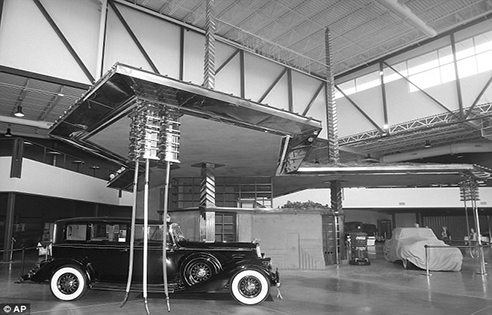 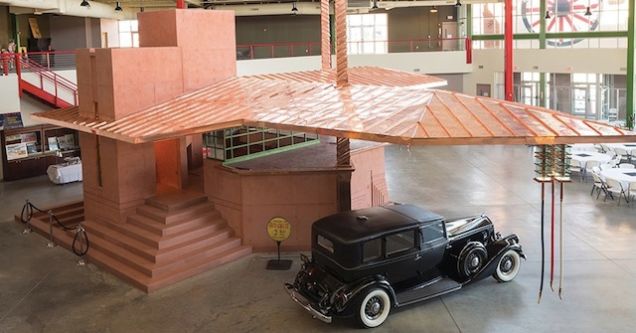 In 1927, acclaimed architect Frank Lloyd Wright designed a gas station for Buffalo, New York, envisioning a gleaming center of commerce and social interaction for the bustling industrial city. Almost 90 years later, the structure has finally been completed—in the lobby of an automobile museum.

The Pierce-Arrow Museum has been working to build the service station since 2002 as part of the institution’s transportation collection. After acquiring the plans from the Wright Foundation, the museum had to fundraise for over a decade, eventually securing $6.3 million from the state. They opted to put the station indoors to protect it from Buffalo’s extreme weather, but it also insures them against upkeep down the road—Wright’s structures are notoriously fragile. 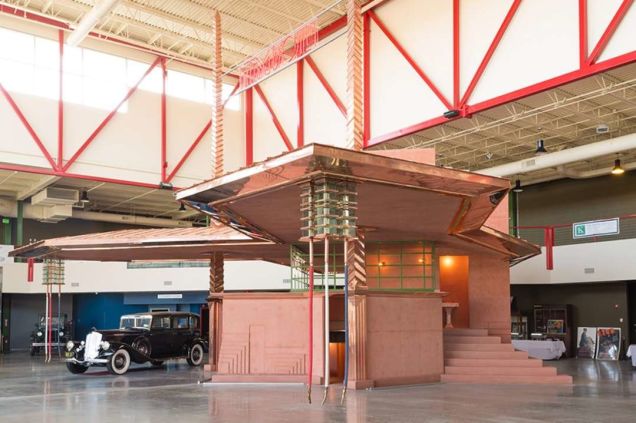 The structure was built according to Wright’s original 1927 plans, which include many of his signature moves. It’s made from poured concrete—a favorite material of Wright—and has a copper roof as well as decorative copper panels and two 45-foot totem poles. The museum also has Wright’s actual cars on loan, including a bright orange 1929 Cord L-29 Cabriolet (not pictured) which seems to match the station perfectly. 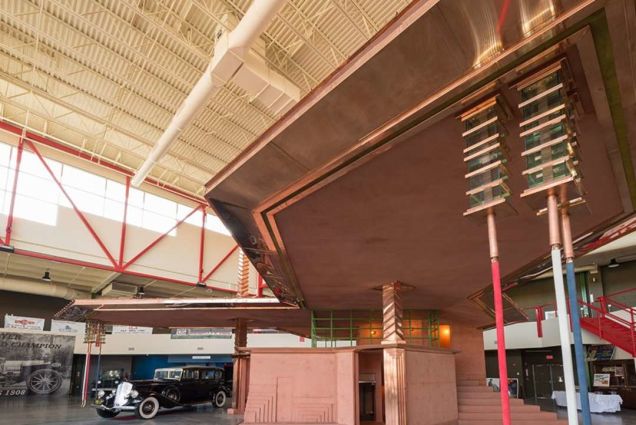 Wright hoped that customers would enjoy spending time at the service station while their cars were being tended to, so he designed an observation room on the second floor, which is accessed by the staircase to the right. There are posh restrooms and even a fireplace, all meant to keep the experience elegant. 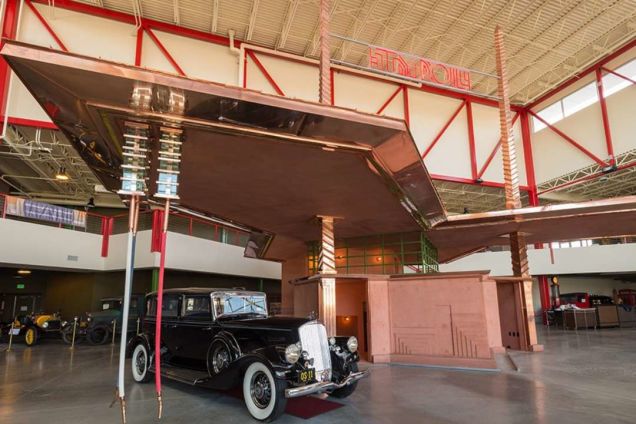 The cantilevered roof also includes the most gorgeous gas-delivery devices ever designed: gravity-fed pumps made from blocks of green glass and copper. 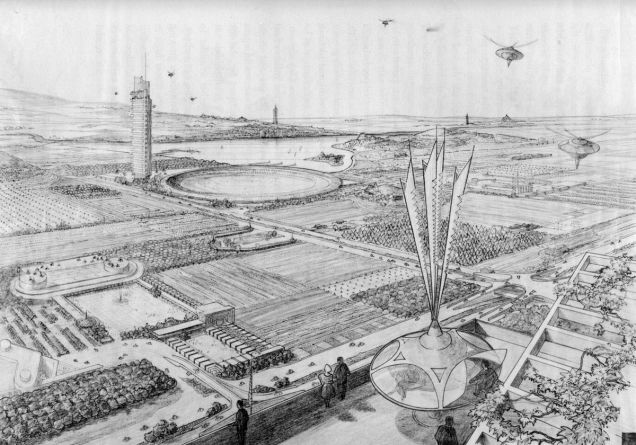 Broadacre City envisioned in the 1950s, scanned by Paleofuture from the 1958 book The Living City by Frank Lloyd Wright

The gas station was part of the plan for Broadacre City, Wright’s vision for a utopian community that was shopped around the country as a giant model and a road show. In fact, the gas station was the centerpiece for this development at the dawn of the automobile age, as explained in this excellent post over at Paleofuture. Here’s Wright in his 1932 book The Disappearing City:

“In the gasoline service station may be seen the beginning of an important advance agent of decentralization by way of distribution and also the beginning of the establishment of the Broadacre City.

Wherever the service station happens to be naturally located, these now crude and seemingly insignificant units will grow and expand into various distributing centers for merchandise of all sorts. They are already doing so in the Southwest to a great extent.”

What’s especially fascinating is that Wright was kinda right, in a way. He saw the gas station as the center of the community, where people would linger while picking up merchandise trucked in from the far ends of the country, kind of a present-day trading post. Although he wasn’t exactly on the money as far as people chilling at the local Texaco, he was close about a new kind of social center. As our friends over at Jalopnik propose: He was envisioning the role of the Autogrill in today’s society.